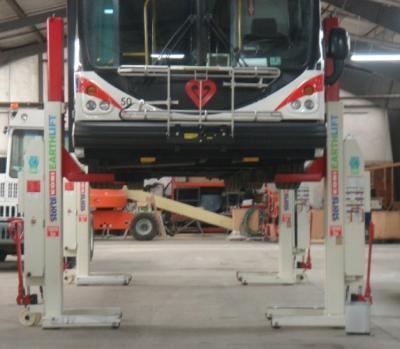 A new industry-wide market research study of fleet operators and transit authorities conducted by heavy duty lift leader Stertil-Koni has found that the three top elements cited as very important to fleet maintenance operations in the U.S. and Canada are safety, mentioned by 97% of respondents, followed by controlling costs (91%) and minimizing downtime (88%).

“From a macro standpoint,” observed Dr. Jean DellAmore, President of Stertil-Koni, “our research shows that preventative maintenance programs are virtually universal, now in use by 93% of all respondents. That’s a genuine plus in terms of vehicle durability and safety.”

Additional factors cited as very important to fleet and transit operations were: productivity (85%), employee training (74%) and spare parts availability (70%). A bit further down the list, but still prominent were: environmental friendliness and energy efficiency, cited by 53% and 51% respectively.

Added Dr. DellAmore, “This is truly a ‘glass is half-full’ moment, as environmental awareness and action appear on the radar screen of more than half of our industry members.”

Participants in the study, which was conducted online, include transportation professionals in commercial, municipal and military fleet-related activities. Of these, Stertil-Koni’s research found that more than three-fourths (77%) currently use vehicle lifts in their fleet maintenance operations and mobile column lifts were the most widely used – cited by more than one-half (51%) of all respondents. These were followed by in-ground piston lifts (18%), 4-post lifts (15%), 2-post lifts (13%) and platform lifts (3%).

Noted Dr. DellAmore, “Of particular interest to our industry is the fact that while more than one-half of all participants (58%) report that their vehicle lifts are third-party certified, nearly one-third (31%) simply are not certain. That is potentially a major area of both concern and opportunity, particularly given the premium that respondents place on safety.”

Continued Dr. DellAmore, “Lift certification by an independent entity, such as the Automotive Lift Institute (ALI), assures the user that a particular lift model is in electrical and mechanical compliance with established and agreed-upon standards. It is also why Stertil-Koni strongly endorses lift certification, combined with a regular program of scheduled maintenance and annual lift inspection, to ensure maximum performance and operational safety.”

Entitled "Fleet Performance 2012," the survey was initiated on October 2, 2012 and designed to help the fleet and transit industries identify and better analyze the latest developments in the sector. Participation was strictly anonymous.