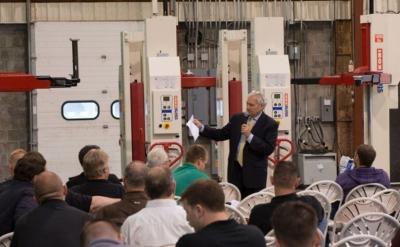 Stertil-Koni, the leader in heavy duty vehicle lifts, today, announced three major initiatives at its 17th Annual Distributor Meeting – held May 4-8, 2013 – in Washington, DC and at the company’s U.S. headquarters in Stevensville, Maryland.

In attendance were more than 80 company employees and representatives from Stertil-Koni’s exclusive distributor network, covering the U.S., Canada, and the Caribbean.

One of the highlights of the gathering, hosted by Stertil-Koni president, Dr. Jean DellAmore, and his team, was the pre-launch of the company’s highly-anticipated new heavy duty 2-post lift series, called the FREEDOM LIFT. It is currently scheduled to be available by the fourth quarter of this year. Noted Dr. DellAmore, “The FREEDOM LIFT addresses an important and growing customer segment and is differentiated by Stertil-Koni’s superior engineering and design approach. Among its numerous attributes, hallmarks include fast lifting speeds, an extremely safe and independent mechanical locking system, and very smooth lifting and lowering synchronization. We anticipate that it will be a real game changer.”

Stertil-Koni also announced the formal introduction of The Stertil-Koni Sales Academy, a state-of-the-art, hands-on training facility, located at the company’s production plant in Streator, Illinois. There, Stertil-Koni distributors, sales people, technicians and staff can participate in hands-on training for the complete range of Stertil-Koni lifting systems – including wireless mobile column lifts, in-ground scissor, and piston lifts, as well as high capacity platform lifts – all under a single roof.

Finally, Stertil-Koni also announced plans to launch The Stertil-Koni Distributor Forum. Explained Dr. DellAmore, “This will be a secure, Distributor-based communication forum where our distributors, sales teams, techs and staff can collaborate and exchange ideas on a real-time basis 24/7.”