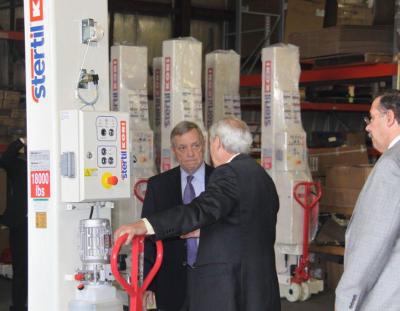 Senator Durbin, who was accompanied by the Mayor of Streator, Jimmy Lansford, as well as staff from the local Chamber of Commerce, was briefed by Stertil-Koni USA President, Dr. Jean DellAmore, and Allan Pavlick, Vice President at Stertil ALM.

As Dr. DellAmore noted, “We were delighted that Senator Durbin visited our facility and had the opportunity to see first-hand how our local Illinois business presence is contributing to two of the Senators key programs: ‘Investing in Illinois’ and ‘Jobs and Promoting Recovery.’ We also are pleased to share with the Senator that Stertil-Koni is one of the few lift manufacturers in the United States that is bringing jobs into the U.S. economy and increasing its manufacturing and training capabilities.”

Stertil-Koni's expansion in Streator is highlighted by its new, 14,000 square foot wing, featuring expanded production capabilities as well as a new sales training center. During the visit, Senator Durbin reiterated that this indeed is a compelling story, particularly when so many American companies have been outsourcing jobs overseas.

Concluded Dr. DellAMore, “The lesson to be learned from Stertil-Koni is that it is possible to be a leading manufacturer right here in the United States of America. The citizens of LaSalle County, Illinois certainly appreciate that fact and we certainly appreciated Senator Durbin's visit.”

Senator Durbin is a Democrat from Springfield, Illinois and he is the 47th US Senator from the state of Illinois. Mr. Durbin is a graduate of Georgetown University and was elected U.S. Senator in 1996. He is the Assistant Majority Leader, the second highest ranking position in the Senate, also known as the Majority Whip. Senator Durbin has been elected to the leadership post by his Democratic colleagues every two years since 2006.