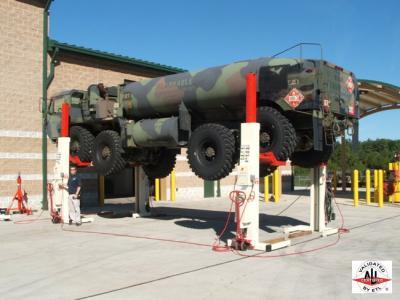 Stertil-Koni lifts are now being manufactured in the United States in our Streator, Illinois facility. The President of our Streator facility, Doug Grunnet, a Vietnam veteran, manufactures the ST 1082 model hydraulic mobile lifts.

This popular application, already in use at numerous military bases Nationwide, was recently taken to a National Guard base in the southern part of the United States where the Contracting Officer was looking at multiple lifting applications for their fleet of HEMMIT, HMMWV, and PLS vehicles.

During the lifting process, it was noted that the Stertil-Koni mobile column lifts fully engaged 1600RX20-inch size tires on the PLS due to the standard 14" forks on the lift. The shorter 12.5" forks used by other lift manufacturers left a larger portion of the tire unsupported, which is obviously a huge problem when lifting this Oshkosh.

The CW4 in charge of the base also noted the deeper offset of the Stertil-Koni carriages provided additional clearance between the column and accessories mounted on the body of the PLS, such as mirrors and grab-handles.

In addition, the Stertil-Koni ST1082 easily picked up the 50,000lb PLS in a smooth, even manner. It was noted that the ST1082 had an additional 8,000 lbs of lifting capacity (when used as a set of 4) over the mobile lifts provided by other manufacturers.

Once in the air, the additional 2" of rise afforded by the Stertil-Koni lift was welcomed by taller technicians. Also noted was the ease in which the columns were transported to the demo bay and positioned under each tire. The technician didn't have to drive the vehicle onto wooden planks to gain additional clearance to engage the tire, which was characteristic of other lift manufacturers.

The CW4 was also intrigued by Stertil-Koni's wireless communication option which allows each column to operate wirelessly and under battery power, eliminating the need for cables between each column. A simple 110v power supply is all that is needed to recharge the batteries when not in use. This feature was unique to the Stertil-Koni lifts and was noted for future reference. Of significant interest was the availability of Stertil-Koni's unique "damage resistant" drive over power/ communication cables, which was another feature not offered by competitive lift manufacturers.

Stertil-Koni is the global market leader in heavy duty vehicle lifts – bus lifts and truck lifts – and is the preferred supplier to the world’s leading companies in the truck and bus industries. Stertil-Koni's breadth of lift products meets all ranges of lifting needs and includes mobile, two-post, four-post, in-ground lifts, parallelogram lifts, half-scissors and the innovative axle-engaging, in-ground, scissor-style heavy duty hydraulic lift configuration. In the United States, under the leadership of Dr. DellAmore, Stertil-Koni USA, Inc. has achieved double-digit annual sales growth every year since its incorporation in Maryland in 1997. Stertil-Koni U.S.A. is headquartered in Stevensville, Maryland and has a major manufacturing facility in Streator, Illinois.