“We’ve partnered up with some of the world’s leaders in lifting systems companies like Stertil-Koni who are really cutting edge and world leaders in the industry. This dynamic has propelled our company into also becoming a world leader in the lift sales and service industry,” noted Larry Morgan, owner of Hoffman Services in Newark, New Jersey.

Here’s a history lesson, originally founded in 1926 as Hoffman & Hamilton, the company began as a builder of gas stations and installer of hydraulic lifting systems. Ninety years later, Hoffman Services is still around but, with one focus only – vehicle lifting systems.

Hoffman is a frontrunner in the industry mostly because of a committed lineage. The current ownership and leadership in the company are the 4th generation to operate the family-run business.

Besides a familial bond to the business, Morgan says being customer-centric is a key to their success.

“We always felt that as a great sales company,” adds Morgan. “We had to become an equally great service company. Today, we have both sales and customer service employees. When a client buys from us, we’re able to take care of the lift systems they’ve purchased. We pride ourselves on solving any problems clients encounter.”

One of Hoffman’s biggest triumphs was the installation of the largest platform lift of its type in North America and one of the BIGGEST in the world. A 4-post Stertil-Koni ST 4600 drive-on platform lift - with a capacity of 132,000 lbs. - was installed in 2014 in a public works facility in Jersey City, NJ, where it’s used by technicians who service fire rescue equipment and other large, heavy duty vehicles.

“It was a precision installation that took the better part of four days,” recalls Matthew Morgan at Hoffman Services.

In addition, Hoffman Services was a part of helping to establish the original standards in 1944 for lifting machines in the United States. They continue to participate in the shaping 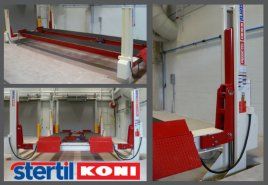 of lift standards in the U.S.

Concludes Larry Morgan, “With a reputation for quality, knowledge, and reliability, we’ve been proud to help some of the biggest companies in the world with their automotive lift needs and have established quality relationships with our customers. Unlike other companies, we don’t outsource our customer service – you buy with us, we’re with you every step of the way.”

Photo: Hoffman Services installed the largest 4-post Stertil-Koni ST 4600 drive-on platform lift of its type in North America with a capacity of 132,000.